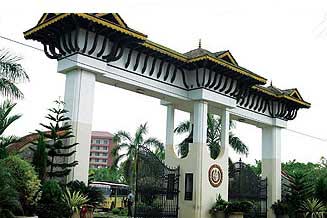 Rajagiri College of Social Sciences (RCSS) was the first institution established under the banner of Rajagiri Vidyapeetham. Envisaged as a centre of excellence in the field of higher education, RCSS currently provides high quality education, research, training and consultancy in the area of Social Work, Management, Computer Science and Library Science. RCSS began as the Department of Social Work at Sacred Heart College, Thevara in 1955.

Initially the Department was offering one year Diploma in Social Services (DSS), affiliated to Madras University, Subsequently two year Masters Degree programme in Social Work (MSW) with specialization in Community Development, Medical & Psychiatric Social Work, Family and Child Welfare, Social Work Administration and Personnel Management and Industrial Relations was introduced. The Department of Social Work was relocated to Hill Campus at Kalamassery, in 1967 and in the year 1980 the Department was elevated to the status of an independent college affiliated to Kerala University. As per the recommendations of the University Grants Commission (UGC), in 1984 the specialization of Personnel Management and Industrial Relations was delinked from MSW course and was offered as a full fledged two year post graduate management programme, M.A (PM&IR).

This programme was later revamped and rechristened as Master of Human Resource Management (MHRM). To meet the growing demand for quality management education in Kerala the College offered Master of Business Administration (MBA), with affiliation to Mahatma Gandhi University, Kottayam in 1995. This was folllowed by Rajagiri International School for Education and Research (RISER) in 1998, three year postgraduate programme in Computer Applications (MCA) in 2001, Bachelor of Social Work (BSW) in 2002, and Bachelor of Library Science (BLiSc) in 2005. From the Hill Campus in Kalamassery the Departments of Human Resource Management and Business Administration of RCSS was shifted to the sprawling and picturesque Valley Campus in Kakkanad in 2001.